Reboot Eden: The Art of Recovery 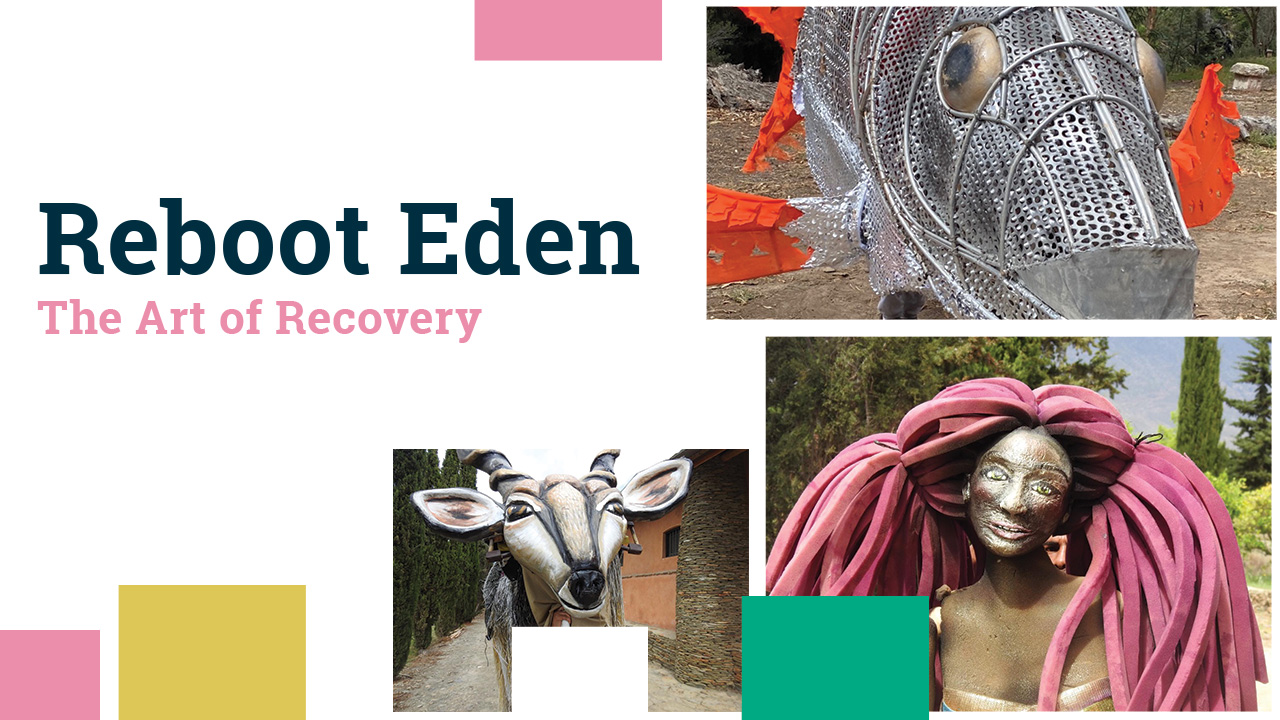 For the past ten years the Centre for Humanities Research’s Laboratory of Kinetic Objects has been engaged in a mutual education and arts initiative (along with partners Net Vir Pret, Handspring Puppet Company, uKwanda Puppetry and Design Collective, and Magpie Collective) in the village of Barrydale some three hours outside of Cape Town. Given the COVID-19 pandemic, this years Barrydale parade is set to convene remotely.

For the past ten years the Centre for Humanities Research’s Laboratory of Kinetic Objects has been engaged in a mutual education and arts initiative (along with partners Net Vir Pret, Handspring Puppet Company, uKwanda Puppetry and Design Collective, and Magpie Collective) in the village of Barrydale some three hours outside of Cape Town.

In December 2019, the theatrical puppetry parade and performance in Barrydale was a harsh and urgent appeal from the rural village. The young people of Barrydale, together with the creative partners, chose to make a show about environmental disaster; staging a planet infected because of neglect, over-exploitation and carelessness. The show presented us with agiant robot that was spraying toxins across the fields in order to maximize profit; because all human life had ceased, it was up to the insects to get together to save the last remaining seedling, in order to have life continue. The show had something of the mood of a science-fiction project but the next year, 2020 has revealed the sense of crisis to be science fact.

Life imitates art. This past year we have all had to reckon with the effects of an exhausted and exploited world-system, an environment in distress and a global pandemic. Everyone around the world is battling with the impact of Covid-19. (Ironically, the Covid was first identified in the same weeks that this production was underway in the research-project in Barrydale – Covid-19 is named after 2019.)

2020 has been a year very troubled and distressing, with massive accelerating unemployment, and fear about human-contact and infection. The Barrydale initiative this year “Reboot Eden” seeks to honour the creative links we have held with care over the past  decade; where a regard for education through arts has been honoured. The creative cycle of the village has, for ten years now, been in a meaningful way, focussed around what is learned in this endeavour: with musical composition and performance, script-writing, costume design, acting and puppetry-design and manipulation all activities that engage the complex and diverse talents of school children. Large questions about social justice, the history of slavery, environmental responsibility, water security and endangered species have all been addressed through deft playfulness.

Given the enormous constraints around health and safety this year, we have had to adapt our methods and processes. In some ways, this has made everyone in the process more aware of the technical elements of communication, and the participants on the team have been engaging in online discussions. Curiously, this has meant that there have been several meetings possible between the rural and urban members of the program (although at times there has been a real problem around data provision highlighting the unevenness of access between city and country youth in South Africa) Nonetheless there has been learning and participation available through digital instruments, and we are aware that this is a journey that is now irreversible. The obligation on us all is to ensure that the advance into the ‘global’ arena of online communication is a positive and not a negative one.

Because this is the tenth year of the Barrydale Parade, we are planning a kind of ‘greatest hits’ event. There will be no Parade, as such, because of concerns about Covid; rather there will be four small-scale shows (although they still use the large-scale puppets). The scripts have been written through workshops, and will each be rehearsed and performed in small and medically safe groups of youngsters, mentors and educators; and these events will be filmed.

This has generated a great deal of interest in the processes of film-making, and Net Vir Pret has been working with a film and media activist who recently moved to the village. The young artists have been exploring the world of sound, and making soundscapes of Barrydale, as well as working on learning about documentary as they archive the history of the parade.

There will be four films made with and by the young people of Barrydale, as part of the arts education process, which this year expands from live performance and puppetry arts, to film and sound-composition. These films will be pre-recorded and live-streamed. There will no doubt be an impact on the income generated for Barrydale, but we have to hope that the gains in distribution and circulation of these small films will in the future draw visitors back to the village in greater numbers, once people observe for themselves what a wonderfully beautiful village this is, as communities try to come to terms with the legacies of apartheid in the region. The Net Vir Pret Barrydalers are environmental activists, with a deep commitment to the wellness of their region. This makes it a very special context indeed. The four films will engage old favourites- the life-sized elephant puppets; dassies (rock hyraxes), the giant red-fin fish, the eland, the ostrich, the secretary bird.

One production in particular explores the distress and loss of the past year; as its narrative arises out of a work written and conceived by the Net Vir Pret young artists who this year had somehow to work through the anguish of losing a young woman in the village through a violent crime. The film tells of a young woman afraid of a shadow that she feels pursues her, and how she is strengthened and helped through the intervention of a tortoise and a secretary-bird.

Each year of making is also a year of learning; in 2020 we are joined by a scholar from UWC, Dr William Ellis who will be documenting an archive of plant-memories. Young people from Barrydale will develop specific and personal archives of their relations to plants from the region that were either part of their family memory, or in some way integral to the sense of a geographically (and botanically) specific self, that emerged in a relationship to the living and growing world.

The 2021 Barrydale Puppet Parade and Performance centres on a family living in Barrydale and the connection a young woman has with an ancient indigenous tree, Old Gwarrie, as well as with the wonderful world she calls home.

From the Office of the Vice-Chancellor: Statement on the Barrydale Reconciliation Day Festival

Statement from the University of the Western Cape Vice-Chancellor and Rector, Professor Tyrone Pretorius, on the Tenth Anniversary of the Barrydale Reconciliation Day Festival.

The Centre for Humanities Research at the University of the Western Cape (CHR), in partnership with Net vir Pret are celebrating 10 years of puppetry in Barrydale. Reboot Eden will be an online program of four new puppet performances that will be available online from the 16th -19th December 2020.

The song was inspired by a request made to Selanvor (who is fast becoming one of Barrydale’s celebrated young artists) from residents of the village, to create an artistic response to the virus and the time we are in now.

The end of each year, for Handspring Puppet Company and the Centre for Humanities Research (CHR, DST-NRF Flagship), has in the past eight years culmin

A Film by Stanley John The 2016 Barrydale Puppet Parade and Performance, called Olifantland, a […]