The end of each year, for Handspring Puppet Company and the Centre for Humanities Research (CHR, DST-NRF Flagship), has in the past eight years culminated in a puppetry performance and parade in the Little Karoo villages of Barrydale and Smitsville. In 2017, the Laboratory of Kinetic Objects (LoKO) [a research and performance platform of the CHR, at the University of the Western Cape] assumed the responsibilities of oversight for this initiative from Handspring Puppet Company, though the project is still supported by Handspring Trust.

[The background information on the Barrydale events, as well as the history of the region, can be located on the PSI (Performance Studies International) website:
https://unima-usa.squarespace.com/handspring-trust-a-center-with-a-mission 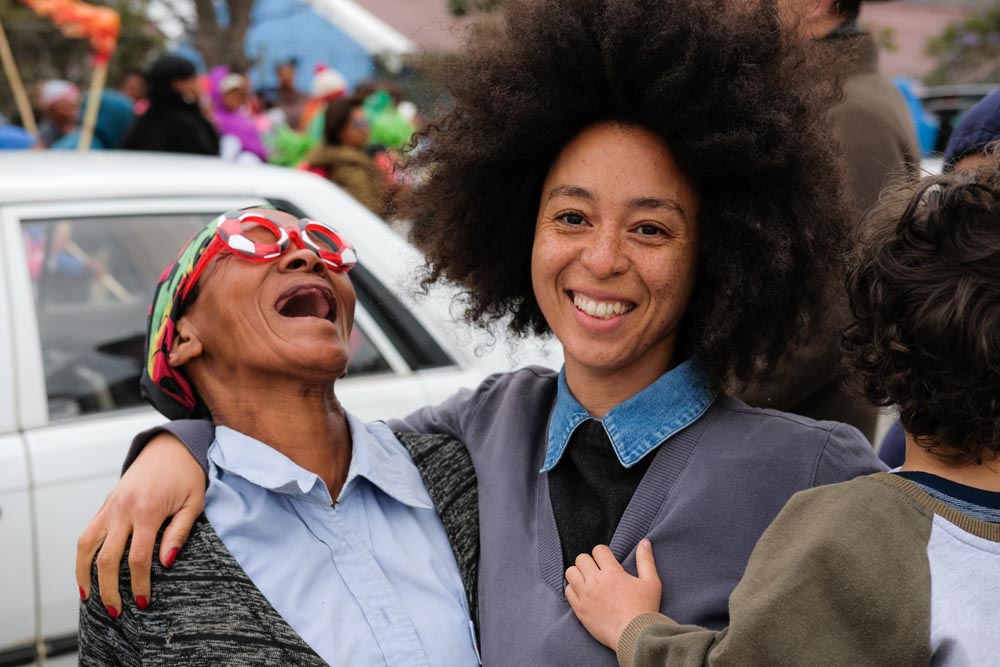 The work of Handspring Puppet Company can be located on the Handspring website.

In 2017 the Parade was led by three life-sized rhinoceros puppets, full of lively personality, who were at the heart of the show, Renosterbos. The plotline of the play arose out of a creative workshop between artistic director Aja Marneweck and the members of the arts collective, Net Vir Pret, under the leadership of Pieter Takelo.

While developing the play, the creative team spent some time observing rhinos in a wilderness habitat in the Sanbona Nature Reserve, outside Barrydale. [Much as last year, the performers and designers who were working on the “Olifantland” theatre piece about elephants, had travelled to the Addo Elephant Park in order to study these remarkable beings within a natural setting. Elephants in Africa are subjected to ruthless and violent slaughter for their tusks, in much the same way that rhinos are being hunted to the brink of extinction for their horns.]

It has become a guiding principle learned through close work with Handspring Puppet Company, that an ethics of mutuality is established during periods of close investigation, as performers study the animals they will be staging. The puppeteer does not simply observe the animal, in order to create a compelling performance; rather the puppeteer must ‘become’ the animal through identification. A real projective regard is what is enabled here, as the manipulator learns how to think and feel ‘as’ the animal, to read the environment and its complex languages. A semiotics of field signs is learned as performers discover what it is that might be generating meaning for the animal in the wild. Handspring’s years of micro-observation of horses, during the staging of he celebrated War Horse, has cultivated in their company of performers, very specific modes of performance and a rather uncanny participant-observation. Given the proliferation of overt signs in the contemporary environment, there is a substantial value in the deliberately slow process of close attention that these archaic activities demand. The human is located once again within the field of meaning generated outside of human craft. 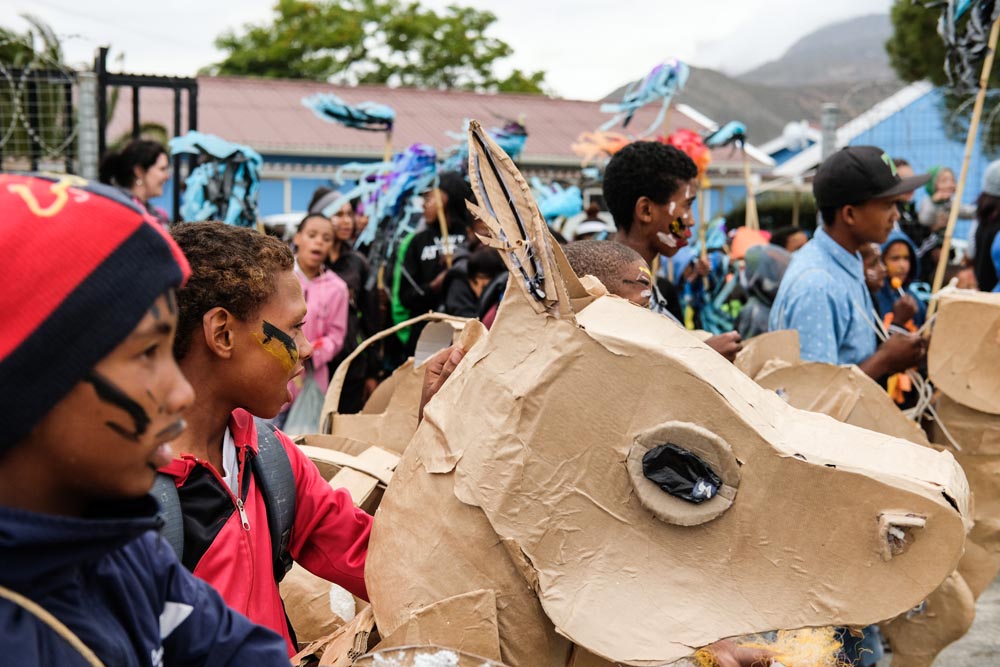 Renosterbos, this year’s play, is a lively drama about poaching, and its consequences for both animal and human. The action shifts between a rural South African setting and an international destination where blood diamonds and embargoed horn and ivory are traded. The performers, from the Barrydale region, give witty, sharp and intelligent performances that explore the contradictions around poverty, poaching and plunder. The puppets, designed and handmade by uKwanda puppet company, are expressive and complex beings. A sophisticated sound design communicates a complex range of rhino vocalisations.

This year’s play is dedicated in Loving Memory to Ncedile Daki, who was gunned down in a Cape Town township early in 2017. Daki was a particularly skilled puppeteer and puppet-maker who worked for a decade with Handspring Puppet Company, and who had gone on to play a significant role in the emerging uKwanda Puppet Company.

The creative team is:

IN LOVING MEMORY OF NCEDILE DAKI