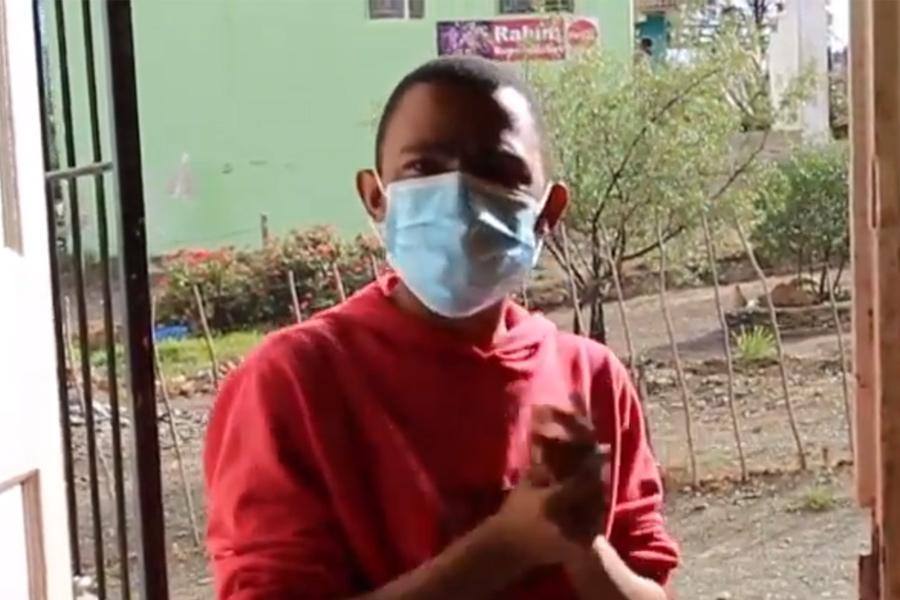 The song was inspired by a request made to Selanvor (who is fast becoming one of Barrydale’s celebrated young artists) from residents of the village, to create an artistic response to the virus and the time we are in now.

Composed and performed by Selanvor A Platjies. Recorded in Barrydale 25 May 2020

This  poetic composition was created by Selanvor Platjies, a 22 year old poet and music artist from Barrydale who has been working with Net vir Pret as an intern since 2017 as well as receiving an artistic internship at Net vir Pret funded by The Centre for Humanities Research @UWC since 2019.    The song was inspired by a request made to Selanvor (who is fast becoming one of Barrydale’s celebrated young artists) from residents of the village, to create an artistic response to the virus and the time we are in now.  Selanvor describes how the song was created as part of a global group of composers and gained great exposure from International Budget Partnership South Africa.  “My song was the only song in Afrikaans about the Corona Virus. The others were in French, English and many other languages. The inspiration behind it was just to create relief in people’s lives. That’s why I wrote the song in a day’s time.”

Two months into a Nation-wide Level 5 and 4 lockdown in South Africa, and the effects of this pandemic have shifted the  physical, economic, social and emotional landscapes of so many South Africans lives irrevocably and indefinitely.   With the virus spreading most acutely in the urban areas of the Western Cape, it has also had a massive impact on the lives of young people in rural areas.  CHR’s long term partner, Net vir Pret run the main aftercare and daily feeding schemes for children of the Klein Karoo village, and since 2010 have collaborated with the CHR and its artistic fellows to create a year-long artistic process that culminates in the annual Giant Puppet Parade.   Net vir Pret provides a safe haven and daily creative facilitation for hundreds of local children, but the lockdown has meant the closure of the Centre and the suspension of all their programmes.  Derek Joubert of Net vir Pret writes  ‘our immediate concern was for those youngsters who depend on us for a daily meal and we asked the local Disaster Committee for permission to prepare and deliver food to them two or three times a week. At the same time the Lunchbox Fund, who normally provide nutritious foodstuff to help with feeding during our Holiday Schools, notified us that they were sending 60 food hampers to us for distribution, each hamper supplying a family of four and we were allowed to distribute these.’

Selanvor’s passion for hip hop and spoken word started when he was in grade 11, he says “I have always appreciated Afrikaans hip hop. At school, I liked poems and writing and in grade 12 I tried to write my own music but was laughed at. Then I applied to Net Vir Pret. Peter Takelo saw what I could do. He fully supported me. I started to rap in drama pieces. We performed at schools. I was part of his [Takelo’s] drama piece, Die Rooi Doppie. He took me to the Namaqua Land / Northern Cape for Rap. Then I found myself writing my own songs. I now have a full album”.   Selanvor has been collaborating with the CHR through the process of the giant puppet parade since the 2017 production Renosterbos, which explored the  harrowing plight of Rhino poaching in South Africa, and the significance of raising awareness of these great creatures for our youths today.  In 2018 Selanvor took on the key role as head puppeteer for the giant fish puppet Redfin, designed and created by resident artists of the CHR Ukwanda Puppet Company, in the annual parade River and Redfin which went on to perform at the Assitej International Cradle of Creativity at the Baxter Theatre in 2019.  Part of this role was to create the original spoken word verse for the giant fish, which Selanvor performed and which left a lasting impact on audience members.  In 2019 as part of Selanvor’s artistic internship on the parade, he stepped into the role of digital music composer, creating the full soundtrack for the production The Last Spring in collaboration with Kathyayini Dash a visual artist and musician from Delhi.  As part of this process in partnership with the CHR, Selanvor was mentored by music producer and UWC PHD student Warrick Sony from Kalahari Surfers.

Net vir Pret has fostered creative talents and supported the growth of self-expression in many youngsters, and these past months have instigated a number of new ways that Net vir Pret is working with young people to cope and come to terms with what Covid 19 means for the present time.  When concerns about Covid 19 led to the closure of South African schools in mid-March, Net vir Pret was able to get permission from the regional Medical Office of Health to keep youngsters occupied in a Holiday School, provided they were kept separated in groups of not more than 10, that all activities were strictly supervised and held outdoors and that an educational input on the virus be part of each day’s delivery. 80 youngsters registered and the Holiday School ran until the national lockdown on 24 March brought closure of the centre and suspension of all activities. But not before Cherie Dirksen’s craft studio had made their own face masks.

Net vir Pret  have now also been given permission to deliver certain essential services to the  community of Barrydale. These include: