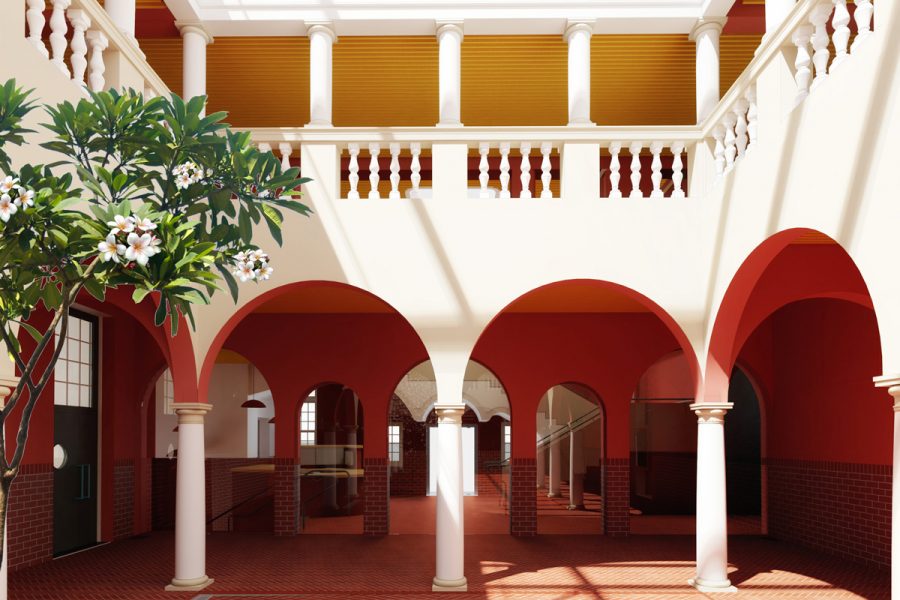 Artist impression of the new lobby on Greatmore street from the courtyard. Courtesy of Wolff Architects

Inviting Artists and Scholars to Reimagine the Future of the Humanities Beyond the Divided City.

In 2016 the National Research Foundation (NRF) and the Department of Science and Innovation accepted a proposal from the CHR to advance an inquiry into the arts and the humanities. By all accounts the proposal reflected increasing pressures to undo the racial geographies of apartheid by bringing the arts and humanities into a more proximate relationship with each other. For the University of the Western Cape, the project was a bold statement. From a university that had been refused the disciplines of the arts and was committed to imagining a postapartheid future, a proposition was made for the indispensability of the arts to deracialise society and create new understandings of the problems of race.

Through experiments in Athlone and Chapel Street, Woodstock, and following vibrant partnerships forged between urban and rural divides, the NRF awarded the CHR a national flagship status to pursue the university’s priority projects in the humanities. A core commitment of the flagship was to secure a facility to pursue its objectives. With an infrastructural investment supported by government, the university has begun the refurbishment of a derelict former school building in Greatmore Street, Woodstock.

The Greatmore Street initiative in Woodstock is testimony to the commitment of the university to build on its longstanding achievements in humanistic inquiry. Together with national and international partners that include Ukwanda Puppetry and Design Collective, the Handspring Puppet Company, documentary filmmakers, jazz musicians, and visual artists, a dynamic project was conceived to reimagine UWC as a university in the city and the world. The potential for bringing the arts and humanities into such a space of collaboration garnered the support of the National Institute for Humanities and Social Sciences, the A.W. Mellon Foundation, the National Research Foundation, the Consortium of Humanities Centers and Institutes, the Dullah Omar Foundation, and university partners across the continent and the world.

With the Greatmore Street initiative, the Centre for Humanities Research envisions an intervention that imagines a future beyond the constraints of the divided city. This opening of “the doors of learning” reinvigorates a vision for the university, inviting artists and scholars to build that future for UWC and the city together.

On 20 February 2015, the Centre for Humanities Research hosted the first Distinguished Lecture in its African Humanities and Letters Lecture Series for 2015 at […]