Unstitching Rex Trueform: The Story of An African Factory 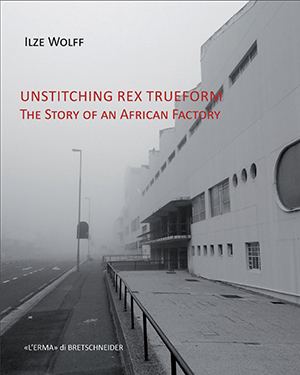 The CHR congratulates Architectural Fellow Ilze Wolff on the publication of Unstitching Rex Trueform: The Story of an African Factory by L’ERMA di BRETSCHNEIDER in 2017. The book was the recipient of the first edition of LERMAC Prize in 2016.

This dissertation is an interdisciplinary study of the Rex Trueform garment manufacturing factory in Salt River, Cape Town. It follows the narrative of the site from the date of completion of the first factory in 1938 up until conversion of the site into an office park in 2013. Architecturally, the buildings are key works by pioneer modernist architects, Policansky, Andrews and Niegeman. The analysis of the form and the space of the buildings is interlocked with an analysis of the conditions within which these distinct buildings were conceived and built. As 20th century industrial buildings in Cape Town, they are representative of a particular kind of modernity, one that is entangled with constructions of race, class and gender. The dissertation looks at how particular notions of race, class and gender were constructed, materialised and inscribed in the architectural form and space.

The buildings are a primary archival source, but conversational interviews with exworkers begin to give a glimpse of what it was like to work for Rex Trueform, considered as a significant company in the clothing manufacturing industry.

Visual material, drawings and film footage, tracks the architectural development of the site, linking it with key moments in the political life of South Africa. This raises questions around the relationship between the apartheid state-endorsed white capital and disenfranchised black labour. Race and identity is a key theme, questioning the role that industry, sociology and apartheid played in the constructions and stabilising thereof with the Cape factory as a primary site. The buildings, situated both in the historical time as well as in the contemporary postapartheid framework, offer multiple readings of how space and architecture contributed towards ascribing identities onto people and how these ascribed identities were and are being contested and disrupted. The dissertation thus raises questions of how the modern city of Cape Town was produced by looking at some of the socio-political conditions under which Rex Trueform, a major industrial site, was developed.