A Tale of Two Cities: Finding Storyville in the Archives: A Seminar by Emily Landau

The CHR DST/NRF Flagship in Critical Thought in African Humanities and the Women’s and Gender Studies Department at UWC invite you to a seminar by Dr. Emily Landau:

A Tale of Two Cities: Finding Storyville in the Archives 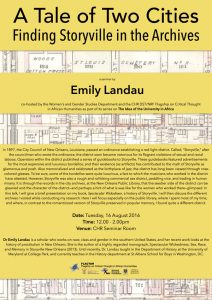 The CHR DST/NRF Flagship in Critical Thought in African Humanities and the Women’s and Gender Studies Department at UWC invite you to a seminar by Dr. Emily Landau.

In 1897, the City Council of New Orleans, Louisiana, passed an ordinance establishing a red-light district. Called, “Storyville,” after the councilman who wrote the ordinance, the district soon became notorious for its flagrant violations of sexual and racial taboos. Operators within the district published a series of guidebooks to Storyville. These guidebooks featured advertisements for the most expensive and luxurious bordellos, and their existence (as artifacts) has contributed to the myth of Storyville as glamorous and posh. Also memorialized and celebrated as the birthplace of jazz, the district has long been viewed through rose- colored glasses. To be sure, some of the bordellos were quite luxurious, a fact to which the musicians who worked in the district have attested. However, Storyville was also a rough and rollicking commercial sex district, peddling vice, and trading in human misery. It is through the records in the city archives, at the New Orleans Public Library, that the seedier side of the district can be gleaned and the character of the district—and perhaps a hint of what is was like for the women who worked there—glimpsed. In this talk, I will give a brief presentation on my book, Spectacular Wickedness, a history of Storyville. I will then discuss the different archives I visited while conducting my research. Here I will focus especially on the public library, where I spent most of my time, and where, in contrast to the romanticized version of Storyville preserved in popular memory, I found quite a different district.

Dr Emily Landau is a scholar who works on race, class and gender in the southern United States, and her recent work looks at the history of prostitution in New Orleans. She is the author of a highly regarded monograph, Spectacular Wickedness: Sex, Race, and Memory in Storyville New Orleans (2013). Until recently, Dr. Landau taught in the Department of History at the University of Maryland at College Park, and currently teaches in the History department at St Albans School for Boys in Washington, DC.

This is part of a series on The Idea of the University in Africa.