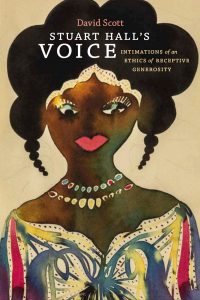 Stuart Hall’s Voice explores the ethos of style that characterized Stuart Hall’s intellectual vocation. David Scott frames the book—which he wrote as a series of letters to Hall in the wake of his death—as an evocation of friendship understood as the moral and intellectual medium in which his dialogical hermeneutic relationship with Hall’s work unfolded. In this respect, the book asks: what do we owe intellectually to the work of those whom we know well, admire, and honor? Reflecting one of the lessons of Hall’s style, the book responds: what we owe should be conceived less in terms of criticism than in terms of listening.

David Scott is Professor of Anthropology at Columbia University. He is the author of a number of books, including Omens of Adversity: Tragedy, Time, Memory, Justice and Conscripts of Modernity: The Tragedy of Colonial Enlightenment, and is the editor of Small Axe: A Caribbean Journal of Criticism, all also published by Duke University Press.

The CHR congratulates Professor David Scott on this publication.