The Reza Khota Quartet launched their debut album: “Transmutation” in 2014.
Gwen Ansell writes in her review: “Unifying all these tracks are their melodic motifs, submerged and re-emerging alchemically altered, speaking in different voices — just like the title says. But it’s much more fun than that suggests, and definitely an album of the year.” 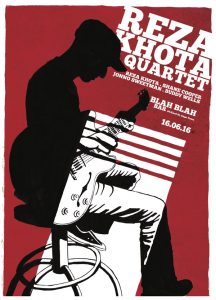 The foursome who are comprised of Jonno Sweetman: Drums, Shane Cooper: Bass, Buddy Wells: Sax and Reza Khota: Guitar, are well established musicians in the SA music scene. Together the band conjures an otherworldly sonic realm, pulsating and grooving deep, as if in a ritual dance. The rite is punctuated by rock tinged guitar tones and dense woven harmony.
Their connection in the musical moment feels telepathic. Committed to the journey within, this music is beyond notions of what jazz is or should be. Beyond the contrivances of nationalism and South Africanism. It is connected to the ancient, universal beat of existence.