The Reza Khota Quartet with live art by Dathini Mzayiya 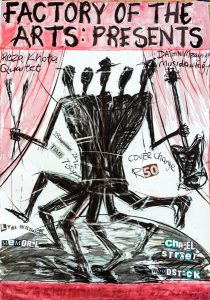 Khota and Mzayiya are currently Artists-in-Residence, based at the Factory of the Arts as part of a programme presented by The Centre for Humanities Research affiliated with the University of the Western Cape (UWC).

For a while now, Khota and Mzayiya have been regularly collaborating together as a duo, with live guitar improvisation accompanying live painting that is sonically amplified. Now the duo will expand on their existing performative project by including musicians from Khota’s quartet which also features Jonno Sweetman (drums), Buddy Wells (sax) and Shane Cooper (bass). The band will perform new works as well as experiment with Mzayiya on his sound canvas.

The performance series is part of an effort to create new spaces for interdisciplinary collaboration. The vision is to bring artistic activity back to Woodstock and save a music scene injured by the closing of important venues.

The Centre for Humanities Research (UWC) is providing a platform for artists to practise and create autonomously. They will be supporting and facilitating these initiatives with a view towards establishing a lively laboratory of experimentation and imagining, placing aesthetics at the centre of the question of who we are and what we are for, in post-apartheid South Africa.

The occasion will also commemorate Emile Maurice, the convenor of the Factory of the Arts who recently passed away.

About The Factory of the Arts

The Factory of the Arts is a space, existing on the edge of the city between changing worlds and at the cusp of a new artistic community. It’s a community that exists apart from the main commercial structures of the broader Cape Town scene; an inevitable emergence of thinkers and creators unconstrained and critical of the market that shapes so much of the art world. We also exist as a caveat to the unregulated gentrification of the city.

Dathini Mzayiya’s work visualises the nightmares of a city and country unconcerned with the lives of the poor and marginalised. His use of found objects as surfaces for his work further locates his work within the city. This work resonates with the wheat paste images by Burning Museum, which are put up around the city as a reminder of the communities that are being evicted, overlooked and forgotten by a city focussed on selling to the highest bidder. The work of this emerging community seeks to reinvigorate the imagination and look at alternatives to the dull and insipid commercial imperatives of the gentrifiers.

The Reza Khota Quartet launched their debut album: “Transmutation” in 2014.

Gwen Ansell writes in her review: “Unifying all these tracks are their melodic motifs, submerged and re-emerging alchemically altered, speaking in different voices — just like the title says. But it’s much more fun than that suggests, and definitely an album of the year.”

The foursome who are comprised of Jonno Sweetman: Drums, Shane Cooper: Bass, Buddy Wells: Sax and Reza Khota: Guitar, will lead this weeks jam session at The Wizoo presenting material from the album as well as a few new tracks.

Venuw: The Factory of the Arts, 96 Chapel Street, Distict Six.