Remains of the Social

The CHR and Wits University Press is pleased to announce the publication of:

Remains of the Social: Desiring the Post-Apartheid 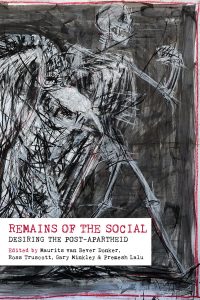 To translate apartheid into globality shares the problem of all translation: it is necessary yet impossible.  Remains of the Social inhabits this problem brilliantly, moving from high theory to punk in Afrikaans, from the grand staging of the Moses of Michelangelo to the Moses Twebe Great Hall in subaltern Dimbaza.  again and again, I was transported into what Lalu calls “the memory of the future.”  In this brief comment I will mention three: the careful unpeeling of “empathy,” a word that plagues top-down philanthropy; the anguish of the last letters from Dimbaza to the International Defense and Aid Fund; and the murder of education as “the desire to learn” recounted in the very last chapter.  A witnessing book, moving and instructive.

Remains of the Social is an interdisciplinary volume of essays that engages with what ‘the social’ might mean after apartheid; a condition referred to as ‘the post-apartheid social’. The volume grapples with apartheid as a global phenomenon that extends beyond the borders of South Africa between 1948 and 1994 and foregrounds the tension between the weight of lived experience that was and is apartheid, the structures that condition that experience and a desire for a ‘post- apartheid social’ (think unity through difference). Collectively, the contributors argue for a recognition of the ‘the post-apartheid’ as a condition that names the labour of coming to terms with the ordering principles that apartheid both set in place and foreclosed. The volume seeks to provide a sense of the terrain on which ‘the post-apartheid’- as a desire for a difference that is not apartheid’s difference – unfolds, falters and is worked through.

Maurits van Bever Donker is an Andrew W Mellon Foundation Next Generation Researcher in the Centre for Humanities Research (CHR) at the University of the Western Cape (UWC), South Africa.

Ross Truscott is an Andrew W Mellon Foundation Next Generation Researcher in the CHR at the UWC.

Gary Minkley is the NRF: SARChI Chair in Social Change at the University of Fort Hare in East London, South Africa.

Premesh Lalu is Director of the DST- NRF Flagship for Critical Thoughtin African Humanities of the CHR at UWC.