The Centre for Humanities Research, Other Universals – NIHSS Catalytic Project and the University of Cape Town invite you to a public lecture by Professor Gopal Guru (Centre for Political Studies, Jawaharlal Nehru University, New Delhi) titled:

Indian Social and Political Theory: How Adequate is its Standpoint?

Abstract: The formation and practice of Social and Political Theory in the Indian conceptual imagination have, by and large, been a low profile enterprise. It could be argued that in relative terms, social and political theory came to be overwhelmed by two factors: a) added emphasis on descriptive /narrative mode of learning and research thus resulting in the shift away from the need for analytical or truth question or  normative commitment or the value question; b) this skewed focus could be understood, in terms of high profile institutional presence of  Marxist analytical  framework that sought to condition if not over-determine the field of social and political theory in India. Since the 1980s post-structuralist and post-colonialists have provided a counterpoint to Marxist theory; alongside, communitarians and scholars of multi-culturalism also emerged as adversaries of both Marxism and Liberalism.

The disjunction between social and political theory has also limited political theory’s epistemic capacity to capture the complex unfolding of social realities. In this backdrop, the lecture will address questions of theory’s standpoint or ontological location and whether that location is propositional, ethical, experiential and spatial? It will also engage with the question of adequacy and modes of measuring the same. Should we evaluate the adequacy of theory in terms of its being approximate to the theories coming from the west? Or should we measure it in terms of its epistemic ability to capture the reality in its complexity and not totality? This question becomes important because totality could also be relative and not homogenizing like Marxist notion of totality.

Finally, we need to address the following question: does the very intellectual practice of separating social from political theory constitute the source of inadequacy? If yes, how does it strengthen the claim for an adequate theory? Does overcoming the separation between the two form an epistemic precondition for envisioning the more adequate theory of emancipation? We need to overcome these limits by challenging the separation. The full grasp of Indian reality lies in overcoming the separation. Hence the major focus of this talk is to point out the limits and the vocabulary that would help us overcome the suggested inadequacies. 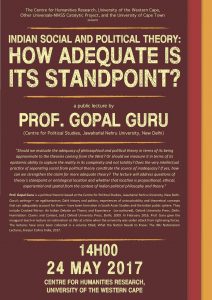 Prof. Gopal Guru is an eminent political theorist and a highly regarded teacher based at the Centre for Political Studies, Jawaharlal Nehru University, New Delhi. Guru’s writings— on egalitarianism, Dalit history and politics, experiences of untouchability and theoretical concepts that can adequately account for them— have been formative in South Asian Studies and the Indian public sphere. They include large number of articles and books such as Cracked Mirror: An Indian Debate on Theory and Experience  (co-authored), Oxford University Press, Delhi; Humiliation: Claims and Context, (ed.) Oxford University Press, Delhi, 2009. In February 2016, Prof. Guru gave the inaugural teach-in lecture on nationalism at JNU at a time when the university was under attack from right-wing forces. The lectures have since been collected in a volume titled, What the Nation Needs to Know: The JNU Nationalism Lectures, Harper Collins India, 2017