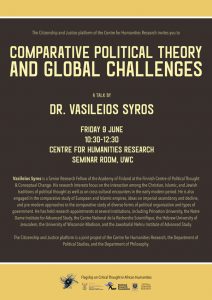 Vasileios Syros is a Senior Research Fellow of the Academy of Finland at the Finnish Centre of Political Thought & Conceptual Change. His research interests focus on the interaction among the Christian, Islamic, and Jewish traditions of political thought as well as on cross-cultural encounters in the early modern period. He is also engaged in the comparative study of European and Islamic empires, ideas on imperial ascendancy and decline, and pre-modern approaches to the comparative study of diverse forms of political organization and types of government. He has held research appointments at several institutions, including Princeton University, the Notre Dame Institute for Advanced Study, the Centre National de la Recherche Scientifique, the Hebrew University of Jerusalem, the University of Wisconsin-Madison, and the Jawaharlal Nehru Institute of Advanced Study.