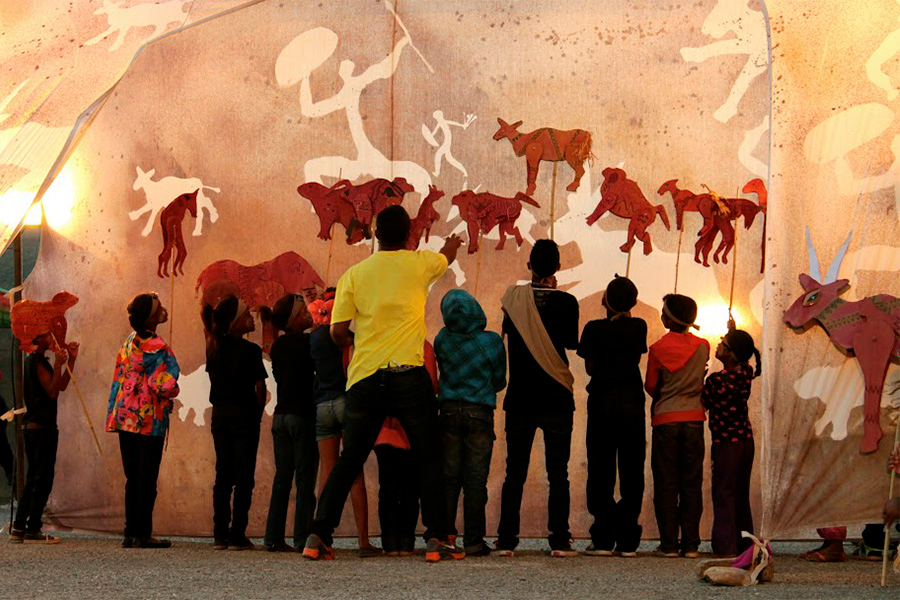 The CHR warmly congratulates Peter Takelo and Derek Joubert of our partners Net vir Pret for being awarded Gold Medals by UWC.

Peter Takelo and Derek Joubert have for the past ten years worked closely with the CHR in building our partnership with Net vir Pret, the afterschool arts education NPO which Takelo and Joubert oversee in Barrydale. Together we have developed a puppetry-based arts initiative in this rural town. The partnership involves the CHR’s Laboratory of Kinetic Objects, Ukwanda Puppets and Designs Art Collective, postgraduate fellows, international partners, and Handspring Puppet Company. Over the last decade, we have created a major project of national and international significance as a model programme in the arts and rural education.

Takelo and Joubert, as director and manager of Net vir Pret, have brought a complex understanding of rural life in post-apartheid South Africa. They have also offered keen insight into how the afterlives of the traumas of apartheid, as well as the impacts of climate change on the fragile ecology of the arid Klein Karoo affect rural youth. What they have accomplished is an exemplary project that seeks to overcome the effects of forced removals, educational depletion, and aesthetic impoverishment.

The work that Takelo and Joubert have helped to make possible and have sustained with the CHR is remarkable and of considerable interest to an international scholarly community attentive to questions of ‘precarity.’ Nothing could have made the timeliness of their engagement more evident than the Covid-19 pandemic, which has been associated with the black market in the illicit trade of endangered species. Through Net vir Pret and the CHR, the youth of Barrydale are making theatre that helps us to imagine our obligation to one another and to the natural world. Such obligations have been explored in Net vir Pret’s annual puppetry parade and performance each Reconciliation Day in Barrydale, supported through the CHR. The puppetry productions are culminations of year-long collaborations and have included performances about the poaching of elephants and rhino, the legacies of slavery, histories of the Hessequa, the exploitation of the local river, and the subsequent impact on the endangered redfin minnow, a fish found only in Barrydale.

In the past year, a mobile computer clinic has been donated to the village, where youth can continue to communicate and grow, despite the lockdown. The published archive of Tales from the Elders, developed recently by residents of Barrydale, is a document holding on to the record of lives that were damaged by apartheid-era forced removals. Scholars who visit the project from around the world envy the mutuality of the thinking and embodied education care that arises from the ethos of Net vir Pret, which has also profoundly shaped the CHR’s approach to the ethics of community partnership in arts education.

The children of Barrydale have been drawn into exceptional learning experiences. The young mentors in the group have travelled to the Addo Elephant Park to study elephant behaviour, to the Sutherland Observatory to study the cosmos, and to a rhino conservation area, to learn about poaching, rhino behaviour, and breeding programmes. These trips were undertaken as part of the CHR and Net vir Pret’s substantial commitment to ‘learning through the arts’ as the children undertake research towards developing the original script and puppetry production for each year’s puppetry parade and performance, putting forward creative engagements that address many of our most pressing social, political, and environmental questions. The children also took part in the ASSITEJ children’s International Theatre Festival in 2019, performing at the Baxter Theatre in Cape Town.

The awarding of Gold Medals to Peter Takelo and Derek Joubert honours the immense commitment of these two arts educators for their exceptional gift in celebrating the potential that is released through arts engagement and expanding the horizon of youth in Barrydale and surrounding farming communities.