PAN: An Intellectual History of AI 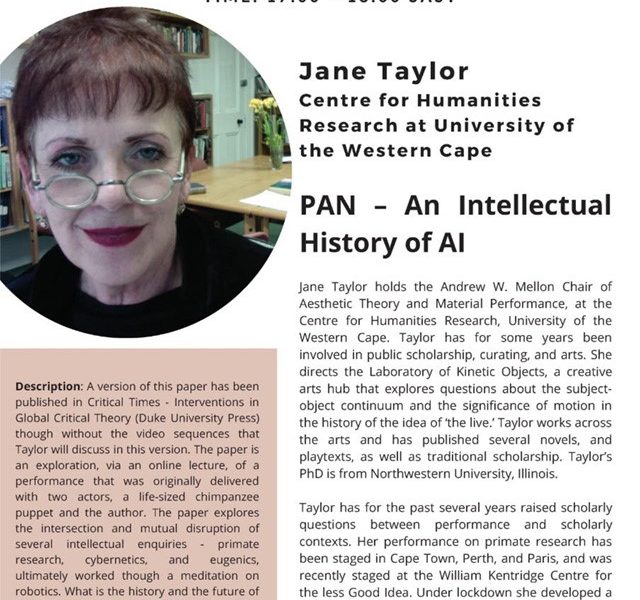 The CHR’s Professor Jane Taylor will be giving a talk as part of the HUMA Interdisciplinary Seminar Series on 8 April 2021.

Taylor’s paper “PAN: An Intellectual History of AI” revisits a performance she delivered with two actors and a life-sized chimpanzee puppet and explores the intersections of intellectual inquiries that include primate research, cybernetics, eugenics, and robotics. A previous version of this paper “PAN: A Performance Lecture” was published in Critical Times in 2019. In the article’s prefatory note, Taylor outlines:

The document that follows is an exploration, via lecture and performance, of two distinct but mutually disruptive skeins of research around the notion of “intelligence” in the early to mid-twentieth century. Here I have in mind, on one hand, the field of primate studies, and, on the other, the question of artificial intelligence and machine learning (broadly speaking). Both fields have destabilized our understanding of the limits of the fully human, and the “almost human.” These questions are in turn drawn into speculations about performance and the prosthetic body: more precisely the prosthesis that is the puppet.

“PAN: An Intellectual History of AI”

Jane Taylor is the Andrew W. Mellon Chair of Aesthetic Theory and Material Performance and the Convenor of LoKO (Laboratory of Kinetic Objects) at the CHR. This seminar is hosted by HUMA (the Institute for Humanities in Africa) at the University of Cape Town