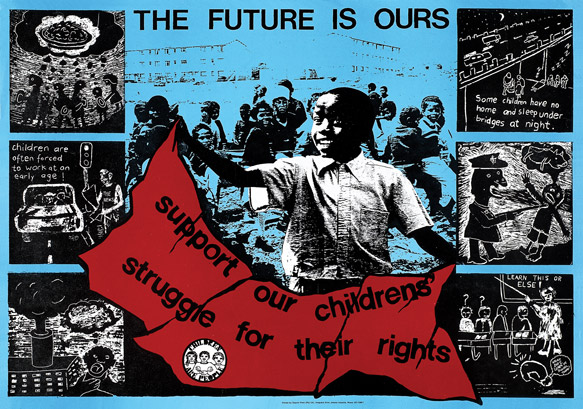 The Community Arts Project (CAP) Collection was acquired by the CHR at UWC in 2009 through a donation from the Arts and Media Access Centre (AMAC), which had previously operated as CAP. The collection consists of various bodies of visual work, including paintings, drawings, photographs, sculptures, prints and posters.

CAP is well-known for its resistance posters, particularly those produced in the 1980s and early 1990s by various organisations linked to the liberation movement. These posters, some of which were shown on ‘Interruptions: Posters from the Community Arts Project Archive’ (Open Design Festival, Cape Town, 2014 and University of Minnesota, 2014), form a core component of the CHR’s CAP collection. They have, however, been amalgamated with a 1990s donation of CAP posters to the UWC-RIM Mayibuye Archives, so forming a single and larger collection of South African resistance posters. While most of the posters in the CAP collection were made at CAP, the Poster Collection also consists of works made elsewhere, such as at the Screen Training Workshop (STP).

The resistance posters in the CAP Collection were made mainly in the 1980s and early 1990s, during a particularly intense phase of the struggle against apartheid. During this time, literally hundreds of people, all belonging to one anti-apartheid organisation or another, interrupted their usual roles in everyday life – as workers, shop stewards, students and representatives of youth, community, church, labour and civic organisations. In so doing, they become something else – ‘artists’, makers of images. What these people, most of whom were aligned to the United Democratic Front (UDF), left behind was a plethora of hand-made posters. These were mostly made by using screenprinting as a means of mass production and communication. In making these posters, they were assisted by a small group of trained artists, who also made posters of their own. What the UDF and other organisations aligned to what was called the Mass Democratic Movement (MDM) required was the visual messaging of the anti-apartheid in public life. What artists offered those from the MDM was a do-it-yourself (DIY) means of aesthetically messaging the anti-apartheid, and a co-operative pedagogy of doing, based on the ethics of ‘each one, teach one’. It was this synergy between the need for anti-apartheid messaging and the will of a small group of artists to facilitate collective and subversive political desire that nurtured the counter-culture poster movement of the 1980s and early 1990s. Ironically, if it weren’t for apartheid, we wouldn’t have had the grand flowering of visuality by ‘ordinary’ and mainly working class people that constitutes the posters, as all of them are responses to, and evocations of, the burden of oppression.