Described by Nelson Mandela as a source of inspiration, Richard Turner was a central figure in the white South African student movement and key in its radicalization. Turner acquired his doctorate at the Sorbonne in Paris, where he was inspired by the events of 1968, and returned to South Africa increasingly influenced by Steve Biko and the Black Consciousness movement. His work was forceful and revolutionary, causing him to be banned, confined to his home, and eventually assassinated by state security forces in 1978. Turner’s most influential and incendiary text, The Eye of the Needle, is being returned to print at a critical moment in South African history, when many have turned their attention once again to Black Consciousness and a reconsideration of the Durban Moment. 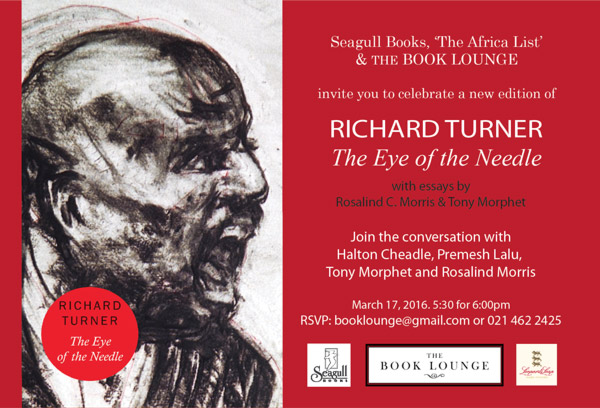 The Eye of the Needle is a largely utopian statement, advocating for the creation of a socialist society couched in the language of Christian ideology. Against the backdrop of contemporary labor disputes and the appearance of new unions and emergent calls for the re-radicalization of South African politics, Turner’s work is newly relevant. Accompanied by Tony Morphet’s contextualizing essays, the book provides readers with an excellent entry point for both historical reflection on 1970s South Africa and critical engagement with contemporary social justice.