THE LAUNCH HAS BEEN CANCELLED.

Join the NRF-DST Flagship on Critical Thought in African Humanities, University of the Western Cape and Wits University Press for the launch of historian, Jon Soske’s

AFRICAN NATIONALISM AND THE INDIAN DIASPORA IN TWENTIETH-CENTURY SOUTH AFRICA 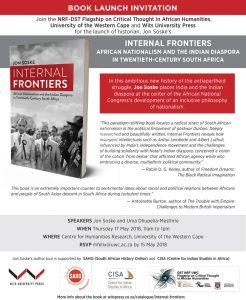 “This paradigm-shifting book locates a radical strain of South African nationalism in the political firmament of postwar Durban. Deeply researched and beautifully written, Internal Frontiers reveals how insurgent intellectuals such as Anton Lembede and Albert Luthuli, influenced by India’s independence movement and the challenges of building solidarity with Natal’s Indian diaspora, conceived a vision of the nation ‘from below’ that affirmed African agency while also embracing a diverse, multiethnic political community.” — Robin D. G. Kelley, author of Freedom Dreams: The Black Radical Imagination

WHERE Centre for Humanities Research, University of the Western Cape

More About the Book

THE LAUNCH HAS BEEN CANCELLED.