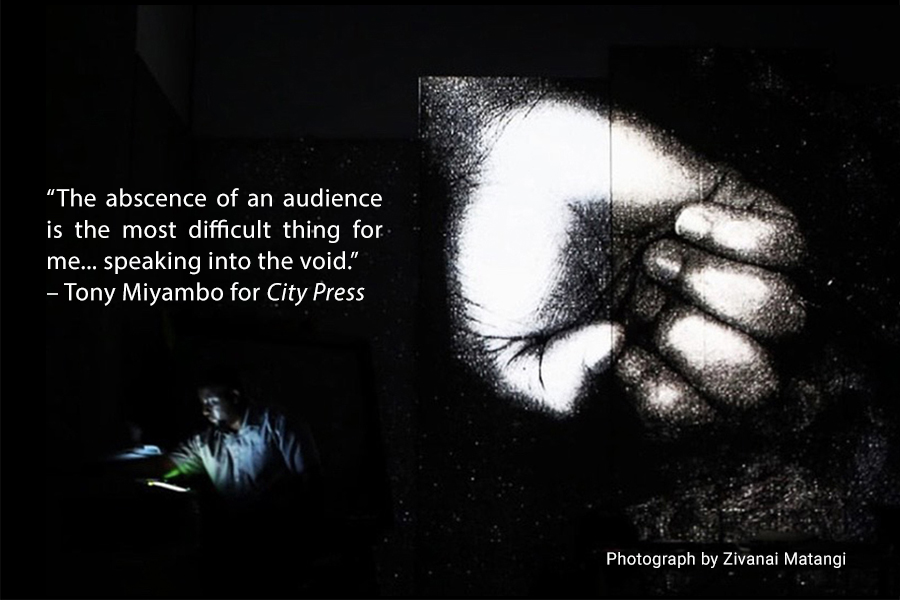 Photograph by Zivanai Matangi, The Centre for the Less Good Idea

Miyambo was featured in an article by Janice Phiri for City Press in which he addresses the difficulties lockdown and Covid-19 restrictions have placed on the theatre. Speaking of the new silence of a theatre without an audience, and the struggle of adapting Commission Continua for online viewing, Miyambo nevertheless maintains hope that these dark times can yield new potential:

South African theatre has always existed on the fringe. The theatre makers who continued to make work despite the lack of resources and support from the mainstream, are the future. There’s an opportunity to re-evaluate some of the barriers within institutions that prevent new work and new voices from living. My hope is that the shared restrictions will make some decision-makers understand what it feels like to have no opportunity to create work.

Commission Continua is conceptualised by Miyambo and Phala O. Phala of The Centre for the Less Good Idea. The show follows the history of South Africa’s commissions of enquiry, laying bare the heart of the South African society’s struggle for real change and reconciliation. Miyambo plays Bright Maluleke, an employee who copies and archives official documents from the commissions. He does his best just to stick to his brief and ignore the content of the files – but this proves difficult when faced with all these pages giving an account of the most critical and catastrophic moments in South Africa’s history. In the frugal setting of a photocopier, a microphone, and a loop station, he begins to give vent to his annoyance with the ‘paper jam.’

Commission Continua has received several positive reviews. Writing for Arts24, Nkgopoleng Moloi highlights Miyambo’s strong performance, the show’s clever use of simple tools, and a “haunting soundtrack” which creates “fragmentation, disruption, repetition, layering.” In a piece about the National Arts Festival for Business Live, Chris Thurman selected Commision Continua as his “pick from the programme,” describing the production as “a devastating one-hander that emphasises how the culpability for historical and recent crimes perpetrated against the South African people has become buried under mountains of paperwork.”