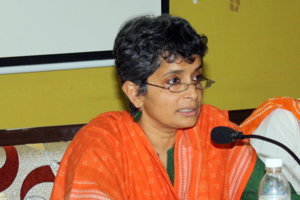 Nivedita Menon is Professor in the Centre for Comparative Politics & Political Theory, School of International Studies at Jawaharlal Nehru University (JNU) in New Delhi, where she teaches Political Thought. Her books include Recovering Subversion: Feminist Politics Beyond the Law (2004), an edited volume titled Sexualities (2007), Seeing Like a Feminist (2012) and Power and Contestation: India since 1989 (2007), which she co-authored with Aditya Nigam. Professor Menon’s lecture at UWC was titled “Feminist dilemmas around sexuality and agency” (23 July 2014).