Changing the Idea of the University

The DST NRF Flagship on Critical Thought in African Humanities 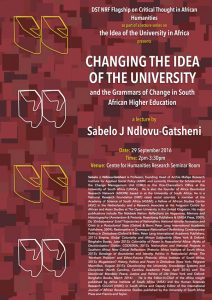 Sabelo J. Ndlovu-Gatsheni is Professor, founding Head of Archie Mafeje Research Institute for Applied Social Policy (AMRI) and currently Director for Scholarship at the Change Management Unit (CMU) in the Vice-Chancellor’s Office at the University of South Africa (UNISA). He is also the founder of Africa Decolonial Research Network (ADERN) based in at the University of South Africa. He is a National Research Foundation (NRF) rated social scientist; a member of the Academy of Science of South Africa (ASSAf); a Fellow of African Studies Centre (ASC) in the Netherlands; and a Research Associate at the Ferguson Centre for African and Asian Studies at The Open University in the United Kingdom. His major publications include The Ndebele Nation: Reflections on Hegemony, Memory and Historiography (Amsterdam & Pretoria: Rosenberg Publishers & UNISA Press, 2009); Do ‘Zimbabweans’ Exist? Trajectories of Nationalism, National Identity Formation and Crisis in a Postcolonial State (Oxford & Bern: Peter Lang International Academic Publishers, 2009); Redemptive or Grotesque Nationalism? Rethinking Contemporary Politics in Zimbabwe (Oxford & Bern: Peter Lang International Academic Publishers, 2011); Empire, Global Coloniality and African Subjectivity (New York & Oxford: Berghahn Books, June 2013); Coloniality of Power in Postcolonial Africa: Myths of Decolonization (Dakar: CODESRIA, 2013); Nationalism and National Projects in Southern Africa: New Critical Reflections (Pretoria: Africa Institute of South Africa, 2013); Bondage of Boundaries and Identity Politics in Postcolonial Africa: The ‘Northern Problem’ and Ethno-Futures (Pretoria: Africa Institute of South Africa, 2013); Mugabeism? History, Politics and Power in Zimbabwe (New York: Palgrave Macmillan, August 2015); Decolonizing the University, Knowledge Systems and Disciplines (North Carolina, Carolina Academic Press, April 2016) and The Decolonial Mandela: Peace, Justice and Politics of Life (New York and Oxford: Berghahn Books, March 2016) He is the Editor-In-Chief of the Africa Insight published by Africa Institute of South Africa (AISA) and the Human Sciences Research Council (HSRC) in South Africa and Deputy Editor of the International Journal of African Renaissance Studies published by the University of South Africa Press and Francis and Taylor.