You are invited by Wits University Press, UWC’s Centre for Humanities Research and The Book Lounge to pay tribute to the memory of eminent historian and activist Martin Legassick at the launch of his posthumously published book 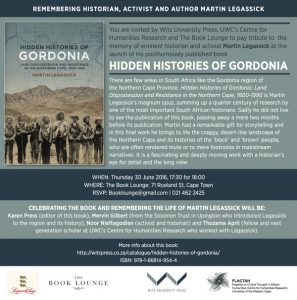 There are few areas in South Africa like the Gordonia region of the Northern Cape Province. Hidden Histories of Gordonia: Land Dispossession and Resistance in the Northern Cape, 1800-1990 is Martin Legassick’s magnum opus, summing up a quarter century of research by one of the most important South African historians. Sadly he did not live to see the publication of this book, passing away a mere two months before its publication. Martin had a remarkable gift for storytelling and in this final work he brings to life the craggy, desert-like landscape of the Northern Cape and its histories of the ‘black’ and ‘brown’ people, who are often rendered mute or to mere footnotes in mainstream narratives. It is a fascinating and deeply moving work with a historian’s eye for detail and the long view.

Celebrating the book and remembering the life of Martin Legassick will be: