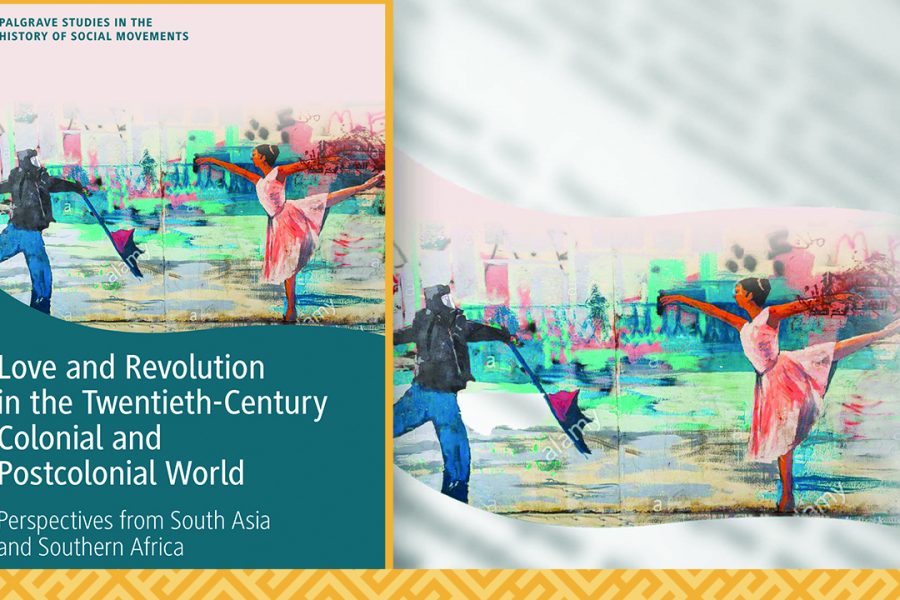 From the Africa Institute:

“The Africa Institute is pleased to invite you to its Faculty and Fellows Seminar Series for a book launch and discussion on Love and Revolution in the Twentieth-Century Colonial and Postcolonial World.

On Wednesday, May 18th at 5:00pm GST Professors Patricia Hayes, G. Arunima, and Premesh Lalu, co-editors of the book, will be joined by Professors Javed Majeed, English and Comparative Literature at King’s College London and Behrooz Ghamari, Chair of the Department of Near Eastern Studies at Princeton University, in a discussion moderated by Professor Elizabeth Giorgis to discuss major themes in the book.

This book discussion will be held over Zoom.

The book addresses emancipatory narratives from two main sites in the colonial world, the Indian and Southern African subcontinents. Exploring how love and revolution interrelate, this volume is unique in drawing on theories of affect to interrogate histories of the political, thus linking love and revolution together. The chapters engage with the affinities of those who live with their colonial pasts: crisis of expectations, colonial national convulsions, memories of anti-colonial solidarity, even shared radical libraries. It calls attention to the specific and singular way in which notions of love of the world were born in a precise moment of anti-colonial struggle: a love of the world for which one would offer one’s life, and for which there had been little precedent in the history of earlier revolutions. It thus offers new ways of understanding the shifts in global traditions of emancipation over two centuries.

G. Arunima is Professor in the Centre for Women’s Studies at Jawaharlal Nehru University, India, and currently the Director of Kerala Council for Historical Research (KCHR), Thiruvananthapuram, Kerala. She has researched and published on both historical and modern contexts in India, focusing particularly on cultural, visual and material texts, and rethinking the politics of the contemporary.

Patricia Hayes is National Research Foundation and South African Research Chair of Visual History and Theory at the Centre for Humanities Research, University of the Western Cape, South Africa. She has published extensively on history and colonial and documentary photography in southern Africa.

Before joining the Africa Institute in Sharjah, Professor Premesh Lalu was a founding director of the Centre for Humanities Research (CHR) at the University of the Western Cape in South Africa. He is co-editor of Remains of the Social: Desiring the Post-apartheid (Wits University Press, 2017), and Love and Revolution in the Twentieth-Century Colonial and Postcolonial World (Palgrave, 2021). His forthcoming book, Undoing Apartheid, will be published by Polity Press in the UK in November 2022.

Javed Majeed is Professor of English and Comparative Literature at King’s College London. He is the author of a number of books and articles on modern South Asia, including Ungoverned Imaginings: James Mill’s the History of British India and Orientalism (1992); Autobiography, Travel and Postnational Identity: Gandhi, Nehru and Iqbal (2007); and Muhammad Iqbal: Islam, Aesthetics and Postcolonialism (2009). He is also the editor, with Christopher Shackle, of Hali’s Musaddas: The Flow and Ebb of Islam (1997), and with Isabel Hofmeyr, of India and South Africa (2016). His two-volume study of G.A. Grierson’s Linguistic Survey of India was published as Nation and Region in Grierson’s Linguistic Survey of India and Colonialism and Knowledge in Grierson’s Linguistic Survey of India (2018). He is currently working on the cultural and linguistic politics of lexicography and conceptions of the English language in 19th century colonial India. He was elected a Fellow of the British Academy in 2021.

Behrooz Ghamari-Tabrizi is Professor and Chair of the Department of Near Eastern Studies at Princeton University and holds a PhD. in sociology from the University of California, Santa Cruz. He is also the Director of Princeton University’s Sharmin and Bijan Mossavar-Rahmani Center for Iran and Persian Gulf Studies. He joined the Department of Near Eastern Studies in February 2019 after fourteen years at the University of Illinois, Urbana-Champaign, where he was a professor of history and sociology as well as the Director of the Center for South Asian and Middle Eastern Studies He is the author of three books on different aspects and historical context of the Iranian revolution of 1979 and its aftermath: Islam and Dissent in Post-Revolutionary Iran: Abdolkarim Soroush and the Religious Foundations of Political Reform; Foucault in Iran: Islamic Revolution after the Enlightenment; and Remembering Akbar: Inside the Iranian Revolution. He has written extensively on the topics of social theory and Islamist political thought in different journals and book chapters. Currently, he is working on a project on Mystical Modernity, a comparative study of philosophy of history and political theory of Walter Benjamin and Ali Shariati.

Elizabeth W. Giorgis received her PhD in the History of Art and Visual Studies from Cornell University in 2010 and her Masters in Museum Studies from New York University in 2004. She served as the director of the Institute of Ethiopian Studies, the Dean of the College of Performing and Visual Art and the director of the Modern Art Museum: Gebre Kristos Desta Center at Addis Ababa University. She is the author of several publications. She is also a member of the editorial board for Transition Magazine, Northeast African Studies journal (NEAS) and the Ethiopian Journal of Social Science and Humanities (EJOSSAH). She is an advisory editorial board member for the Journal for Critical African Studies (JCAS), Callaloo Art and contributing editor for Comparative Studies of South Asia, Africa and the Middle East (CSSAAME).

She is a recipient of several fellowships including The Ali Mazrui Senior Fellowship for Global African Studies at The Africa Institute, Distinguished Visiting Scholar at Brown University, a Visiting Professor at the Academy of Fine Art in Vienna and a fellow at the Rockefeller Bellagio Center Resident Fellows Program in Italy. Her book Modernist Art in Ethiopia (2019, Ohio University Press) is the first comprehensive monographic study of Ethiopian visual modernism within a broader social and intellectual history.

She has curated several exhibitions at the Modern Art Museum: Gebre Kristos Desta Center, more recently, the works of Danish Icelandic artist Olafur Eliasson. She has also participated in several international conferences and public lectures. In January 2019, she served as convener for the first African Humanities Initiative called “Africa as Concept: Decolonization, Emancipation and Freedom” that was sponsored by the Mellon Foundation and the Consortium of the Humanities, Centers and Institutes (CHCI).”