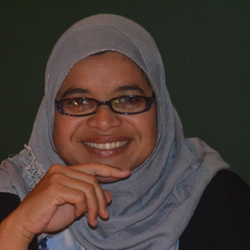 Lameez has completed her B.Admin degree at the University of the Western Cape, majoring in public administration and industrial psychology. She has been the Senior Administrator of the CHR since 2006, co-ordinating various programmes, workshops and conferences within the CHR. In 2007 she was selected by UWC as part of a delegation to the “World Social Forum” in Kenya. She is also an active member of Women In Black, a world-wide network of women actively opposed to injustice, war, militarism and other forms of violence, and has been part of delegations to Spain (2008) and India (2015).