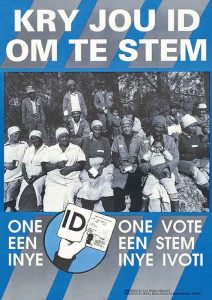 Legal Education Action Project (LEAP), Kry Jou ID om te Stem (Get Your ID to Vote), 1994.Silkscreen poster produced and printed at CAP, Cape Town. Artist(s) unknown. As most people were voting in South Africa’s first democratic elections in 1994 for the first time, a huge voter education programme was undertaken in the build-up to the elections. As many people did not have an ID document because they were not regarded as South African citizens under apartheid, there was also a rush to issue temporary ID documents. Produced in Afrikaans, English and Xhosa, this poster appeals to those without an ID to obtain one in order to vote. Collection: CHR/UWC-Robben Island Museum Mayibuye Archives