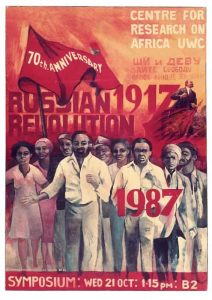 Centre for Research on Africa, University of the Western Cape (UWC), Russian Revolution, 70th Anniversary, 1987. Artist unknown. Place of printing unknown. The symposium on the Russian Revolution, which this poster advertises, evolved out of weekly seminars held by the Centre for Research on Africa at UWC. In the early 1990s, the seminars became the Marxist Theory Seminar (MTS), which sought to bring together political and academic concerns. Collection: UWC-Robben Island Museum Mayibuye Archives