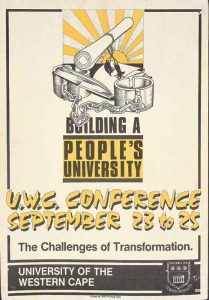 University of the Western Cape (UWC), Building a People’s University, 1989. Offset litho poster. Artist unknown. Place of printing unknown. UWC, founded in 1959 as a tertiary institution for those classified under apartheid as ‘coloured’, became a key site of resistance in the 1980s. At the Challenges of Transformation conference of 1989, organised while Prof Jakes Gerwel was rector, the idea of racially segregated institutions was rejected. In violation of the law, UWC actively encouraged African students to enrol at the university. Earlier, in 1987, Gerwel had declared UWC to be “the intellectual home of the Left”. Collection: UWC-Robben Island Museum Mayibuye Archives