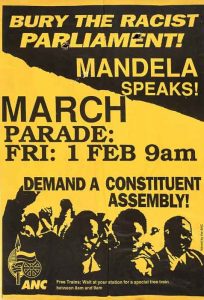 African National Congress, Bury the Racist Parliament! 1991. Silkscreen poster. Place of production and printing unknown. Artist unknown. In the first months of negotiations for a settlement in South Africa, the government tried to thwart the idea of creating a democratically elected constituent assembly, which would to draw up a new constitution for South Africa. The ANC persisted with the demand for a constituent assembly, demonstrating support for the idea through mass action campaigns in the form of rallies and marches. The pressure on the government eventually forced it back down. Collection: CHR/UWC-Robben Island Museum Mayibuye Archives