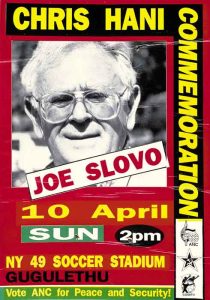 South African Communist Party (SACP), African National Congress (ANC), Congress of South African Trade Unions (COSATU), Chris Hani Commemoration, 1993. Silkscreen poster printed at Allie’s Press, Cape Town. Artist(s) unknown. Chris Hani was Chief-of-Staff of Umkhonto we Sizwe (MK), the military wing of the ANC. After returning to South Africa, he took over as leader of the SACP from Joe Slovo. At the height of the negotiations between the ANC and the government, Hani was assassinated in front of his home in Boksburg, Gauteng, in 1993. His assassination led to fears of a race war. Only a television appeal by Mandela for calm averted this possibility. Collection: CHR/UWC-Robben Island Museum Mayibuye Archives