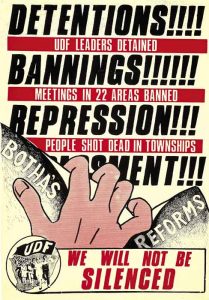 United Democratic Front (UDF), We Will Not be Silenced, 1985. Silkscreen poster probably printed at CAP, Cape Town. Artist(s) unknown. The UDF was the chief target of the apartheid regime when it declared two states of emergency, in 1985 and 1986. Although the UDF itself was not banned, the apartheid government sought to break the organisation by banning its public meetings and detaining its leaders without trial. This poster was made to protests against the clampdown. Collection: CHR/UWC-Robben Island Museum Mayibuye Archives