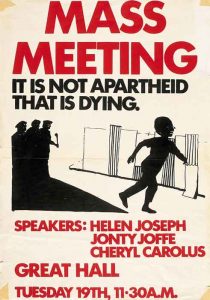 Organisation unknown, Mass Meeting: It is Not Apartheid that is Dying, c. 1985. Silkscreen poster produced and printed in Johannesburg. Artist unknown. This poster advertises a meeting at the Great Hall, University of the Witwatersrand (Wits), to counter claims by the government that reforms meant that apartheid was dead. It also refers to casualties of the State of Emergency, declared by the government in 1985 to suppress the widespread revolt against apartheid. The speakers at the meeting were all members of the United Democratic Front (UDF), a coalition of anti-apartheid organisations. Collection: CHR/UWC-Robben Island Museum Mayibuye Archives