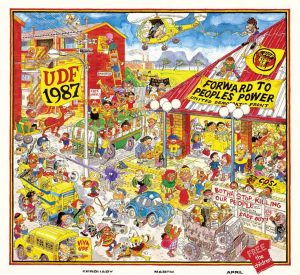 United Democratic Front (UDF), UDF 1987: Forward to People’s Power, 1986. Offset litho poster. Place of production and printing unknown. Artist: Zapiro (Jonathan Shapiro). This image was used to make a calendar, which was a sought-after Christmas gift at the end of 1986. It shows recognisable UDF activists going about their business while under the surveillance of the security forces, who are portrayed as pigs. The UDF was established in 1983 to oppose the establishment of the tricameral parliament, which was to consist of separate houses for people classified under apartheid as white, ‘coloured’ and Indian, but which excluded blacks. CHR/UWC-Robben Island Museum Mayibuye Archives