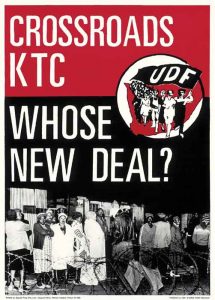 United Democratic Front (UDF), Crossroads, KTC: Whose New Deal? Offset litho poster printed at Esquire Press, Cape Town. Artist unknown. In the 1980s, Crossroads and KTC were two informal settlements on the Cape Flats. Apartheid law meant that the government could demolish a dwelling unless the occupant could prove that (s)he had title to the land. This was impossible as black Africans were not allowed to own land outside the ‘homelands’. The result was that the security forces constantly raided communities such as Crossroads and KTC, destroying shacks and sending people back to the ‘homelands’. Collection: CHR/UWC-Robben Island Museum Mayibuye Archives