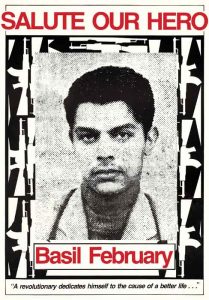 Organisation unknown, Salute Our Hero Basil February, 1987. Silkscreen poster. Place of production and printing unknown. Artist unknown. Born in District Six, Basil February was a soldier in the military wing of the ANC, Umkhonto we Sizwe (MK). He left the country to be trained in military combat in 1964. In 1967, while on his way back to South Africa to head a guerrilla unit, he was killed in a skirmish with security forces near Bulawayo in Rhodesia (now Zimbabwe). Collection: CHR/UWC-Robben Island Museum Mayibuye Archives