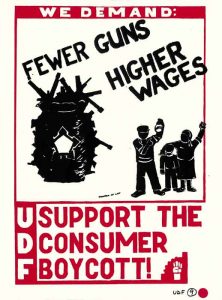 United Democratic Front (UDF), Fewer Guns; Higher Wages, 1985.Silkscreen poster produced and printed at CAP, Cape Town. Artist(s) unknown. This poster is from a series made by youth from the Saldanha Bay area along the West Coast of the Cape, who were assisted by Bridget Pitt. It was made in support of the UDF’s call for a nation-wide consumer boycott in 1985. Collection: CHR/UWC-Robben Island Museum Mayibuye Archives