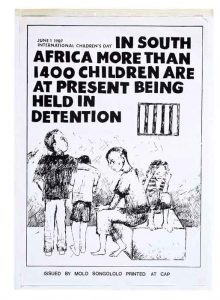 Molo Songololo, In South Africa more than 1,400 children are at present being held in detention, 1987. Silkscreen poster produced and printed at CAP, Cape Town. Artist(s) unknown. In 1987 the ANC initiated the Harare Conference on ‘Children and Repression’. In the same year, the ‘Free the Children’ campaign was launched in response to the detention of children under the States of Emergency, declared in 1985 and 1986. This poster was made in support of the ‘Free the Children’ campaign. Collection: CHR/UWC-Robben Island Museum Mayibuye Archives