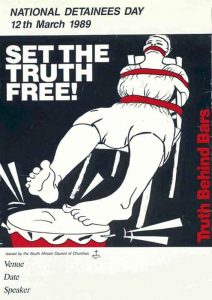 South African Council of Churches (SACC),Set the Truth Free, 1989. Silkscreen poster produced and printed at CAP, Cape Town. Artist(s) unknown. National Detainees Day was initiated in the mid-1980s by the National Detainees Forum. The day was observed by organisations associated with the Mass Democratic Movement, such as the SACC, which played a strong role in pressurising the government to release all detainees. Collection: CHR/UWC-Robben Island Museum Mayibuye Archives