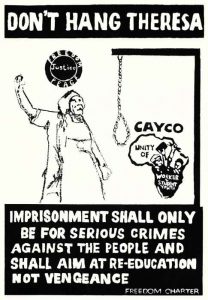 Cape Youth Congress (CAYCO), Don’t Hang Theresa, 1986. Silkscreen poster produced and printed at CAP, Cape Town. Artist(s) unknown. The poster takes a stand against the death penalty imposed on Theresa Ramashmolo, one of the Sharpeville Six who were sentenced to death by hanging under the ‘common purpose doctrine’ in 1985 for the murder of the Deputy Mayor of Sharpeville. Although the death penalty was lifted after international pressure, Ramashmolo and the other five served sentences in jail. All of them were released in the early 1990s. Collection: CHR/UWC-Robben Island Museum Mayibuye Archives