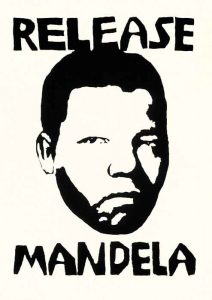 Organisation unknown, Release Mandela, c. 1988.Silkscreen poster produced and printed at CAP, Cape Town, in support of the campaign to release Nelson Mandela from jail. Artist(s) unknown. The Release Mandela Campaign was launched in 1980 by Oliver Tambo and the ANC in exile. In 1985 the United Democratic Front (UDF) launched a new campaign for the release of Mandela, warning the government that there would be no peace in South Africa until he was freed. Collection: CHR/UWC-Robben Island Museum Mayibuye Archives