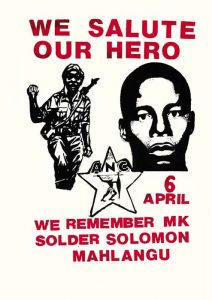 Cape Youth Congress (CAYCO), We Salute Our Hero, c. 1989. Silkscreen poster produced and printed at CAP, Cape Town. Artist(s) unknown. This poster commemorates Solomon Mahlangu, the Umkhonto we Sizwe (MK) cadre. Mahlangu left the country after the 1976 Soweto Uprising to be trained in military combat. He returned a year later with two other MK cadres, Monty Motloung and George Mahlangu. He was arrested after a gunfight with the police in which two white civilians were killed. Although he never fired a shot, he was tried and executed on 6 April 1979 at Pretoria Central Prison. Collection: CHR/UWC-Robben Island Museum Mayibuye Archives