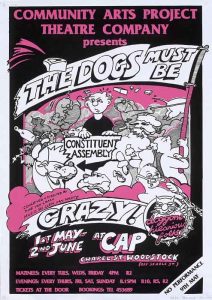 Community Arts Project Theatre Company, The Dogs Must be Crazy, 1991. Silkscreen poster produced and printed at CAP, Cape Town. Artist: probably Trish de Villiers. Written and directed by Mike van Graan, ‘The Dogs Must be Crazy’ was first staged at CAP in 1991 before a run at the National Arts Festival in Grahamstown in the same year, where it won the ‘Hot on the Fringe Award’. Consisting of seven sketches about the “new South Africa”, it was later performed at the Market Theatre in Johannesburg. Collection: CHR/UWC-Robben Island Museum Mayibuye Archives