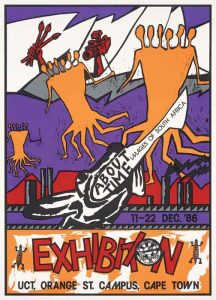 Arts Festival 86 Committee, About Time: Images of South Africa, 1986. Silkscreen poster produced and printed at CAP, Cape Town, to advertise an exhibition linked to the ‘Towards a People’s Culture Arts Festival’. Scheduled to be held at various Cape Town venues from August to December 1986, the festival was banned just a few days before it was due to take place as it was deemed by the apartheid government to be “a threat to national security”. The exhibition, however, went ahead under another name. Artists: Gaby Cheminais, Angela Ferreira and Emile Maurice. Collection: CHR/UWC-Robben Island Museum Mayibuye Archives