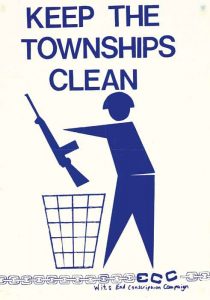 End Conscription Campaign (ECC), Keep the Townships Clean, 1986. Silkscreen poster produced and printed at CAP, Cape Town. Artist(s) unknown. This poster was produced during the ECC’s ‘Troops Out of the Townships’ campaign and is a clever pun on anti-litter advertising. Under the States of Emergency, declared in 1985 and 1986, the presence of security forces in the townships was widespread. Their intent was to crush structures of the people, such as civic and youth organisations and street committees. Collection: CHR/UWC-Robben Island Museum Mayibuye Archives