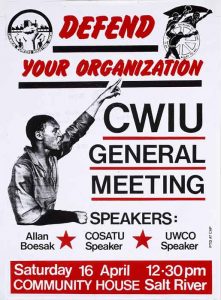 Chemical Workers Industrial Union (CWIU), CWIU General Meeting, 1988.Artist(s) unknown. Silkscreen poster produced and printed at CAP, Cape Town. Artist(s) unknown. The CWUI was born out of the strikes in Durban in 1973. It was launched in 1974 at a time when it was still illegal for black workers to belong to a union. Collection: CHR/UWC-Robben Island Museum Mayibuye Archives