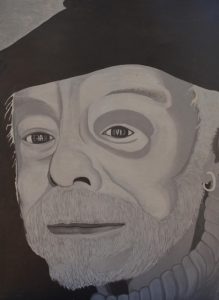 Unknown, James Matthews, undated. Acrylic on canvas. 200 x 150 cm. This painting depicting the renowned poet and author, James Matthews, was found at the Lydia Williams Centre for Memory (formerly St Philip’s School), District Six, Cape Town, home of the CHR’s Factory of the Arts. The establishment of the CHR’s Dullah Omar Centre for Critical Thought in African Humanities (DOCCTAH) in Athlone is aimed at recalling the best traditions of knowledge, for which so many strived in the heady days of the 1980s, and at acknowledging the legacies of major anti-apartheid thinkers associated with the Cape Flats, such as Matthews.