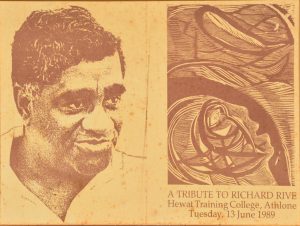 Invitation to a tribute to the author and prominent intellectual, Richard Rive, Hewat Training College, Athlone, Cape Town 1989. A champion of the non-racial and an acknowledged contributor to shaping a postcolonial future, Rive taught at the Hewat Training College, Athlone, Cape Town, for 14 years, from 1975 until his death in 1989. He and his colleagues at Hewat helped to define the intellectual terms for imagining a post-apartheid South Africa at the height of apartheid. The old Hewat campus, now the College of Cape Town, is where the CHR’s Dullah Omar Centre for Critical Thought in African Humanities (DOCCTAH) hosts the Distinguished Lecture in African Humanities and Letters. Lectures are aimed at establishing connections between the University of the Western Cape (UWC) and its publics, with a view to enhancing the project of democratic transformation and non-racialism. Collection: André Marais