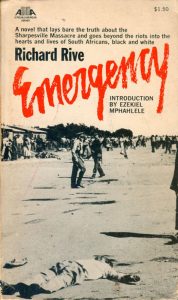 Cover of Richard Rive’s Emergency. Rive taught at Hewat Training College, Athlone, Cape Town, for 14 years, from 1975 until his death in 1989. The establishment of the CHR’s Dullah Omar Centre for Critical Thought in African Humanities (DOCCTAH) in Athlone is aimed at recalling the best traditions of knowledge, for which so many strived in the heady days of the 1980s, and at acknowledging the legacies of major anti-apartheid thinkers associated with the Cape Flats, such as Rive.