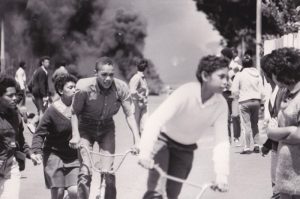 Barricades burn in Athlone, Cape Town, during the student uprisings, 1985. The photograph speaks to Athlone as a once charged environment in the struggle for non-racialism. The Dullah Omar Centre for Critical Thought in African Humanities (DOCCTAH), a satellite of the CHR, is aimed at recalling the educational demands of students in the Western Cape. Photograph: Dave Hartman. Courtesy of the UWC-RIM Mayibuye Archives