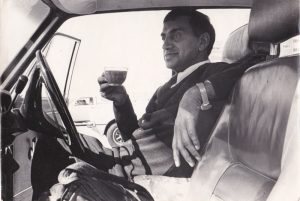 Dullah Omar, c 1974, after whom the CHR’s Dullah Omar Centre for Critical Thought in African Humanities (DOCCTAH) is named. Omar was a minister in South Africa’s first democratically elected government and had close ties with the University of the Western Cape (UWC) through his work at UWC’s Community Law Centre. Photograph: Maurice family archive