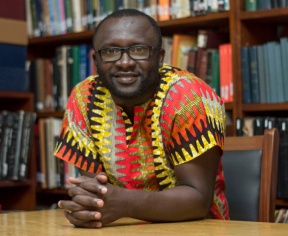 The African Critical Inquiry Programme has named Eric Sunu Doe as recipient of the 2017 Ivan Karp Doctoral Research Award. Sunu Doe is a Ghanaian student studying Applied Ethnomusicology at the University of KwaZulu-Natal’s Music Department. Support from ACIP’s Ivan Karp Award will allow him to do significant research for his dissertation on Ghanaian Palmwine Music: Revitalizing a

Tradition and Maintaining a Community.

Since the 1980s the preservation of intangible cultural heritage has attracted the attention of policy makers, cultural workers, and scholars because of the rapid rate at which cultural practices and traditions are being lost, abandoned, or radically transformed. UNESCO’s policies on safeguarding cultural heritage – the Universal Declaration on Cultural Diversity (2001) and the Convention for Safeguarding Intangible Cultural Heritage (2003) – are recent strategies in protecting intangible cultural heritage. In Ghana one performance tradition on the brink of fading is palmwine music, which emerged along the coast of West Africa in the 20th century as a result of a fusion of guitar traditions and indigenous musical resources. A unique and rich musical tradition, it has been declining in practice and its current status and recent history have been less studied by scholars. This project on Ghanaian Palmwine Music: Revitalizing a Tradition and Maintaining a Community  proposes a comprehensive study of the tradition of palmwine music, exploring strategies for its revitalization and sustenance. Framed within the context of applied ethnomusicology and through the theoretical lens of resilience, adaptive management, and music revitalization, the research will explore how revitalization of palmwine music which is developed in communal musical expressions can enhance its sustenance in the midst of societal change within contemporary contexts. Through interviews and participant observation in performance circles and workshops, Sunu Doe will document the performance praxis of palmwine music in Ghana (in Accra and Kumasi) and investigate whether/how the music currently resonates with the community, and how it might form the basis of a contemporary local music rooted in local experiences and histories. The project will bring fresh perspectives to ways in which community engagement facilitates revitalization and sustenance of hybrid traditions in an African context.

Founded in 2012, the African Critical Inquiry Programme (ACIP) is a partnership between the Centre for Humanities Research at University of the Western Cape in Cape Town and the Laney Graduate School of Emory University in Atlanta. Supported by donations to the Ivan Karp and Corinne Kratz Fund, the ACIP fosters thinking and working across public cultural institutions, across disciplines and fields, and across generations. It seeks to advance inquiry and debate about the roles and practice of public culture, public cultural institutions, and public scholarship in shaping identities and society in Africa through an annual ACIP Workshop and through the Ivan Karp Doctoral Research Awards, which support African doctoral students in the humanities and humanistic social sciences enrolled at South African universities.

Information about the 2018 Ivan Karp Doctoral Research Awards for African students enrolled in South African Ph.D. programmes will be available in November 2017. The application deadline is 1 May 2018.