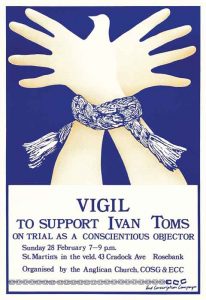 End Conscription Campaign (ECC), Vigil to Support Ivan Toms, 1987. Silkscreen poster produced and printed in Johannesburg. Artist(s): Probably Marlene Powell, Isabel Thompson, Parat and Patrick Cockayne. After two years in the army, Ivan Toms, a doctor working in the community of Crossroads, Cape Town, publicly refused to do any further military service. In 1987 he was prosecuted for this and sentenced to 630 days of imprisonment, after which the ECC embarked on a campaign to publicise his case. Collection: CHR/UWC-Robben Island Museum Mayibuye Archives